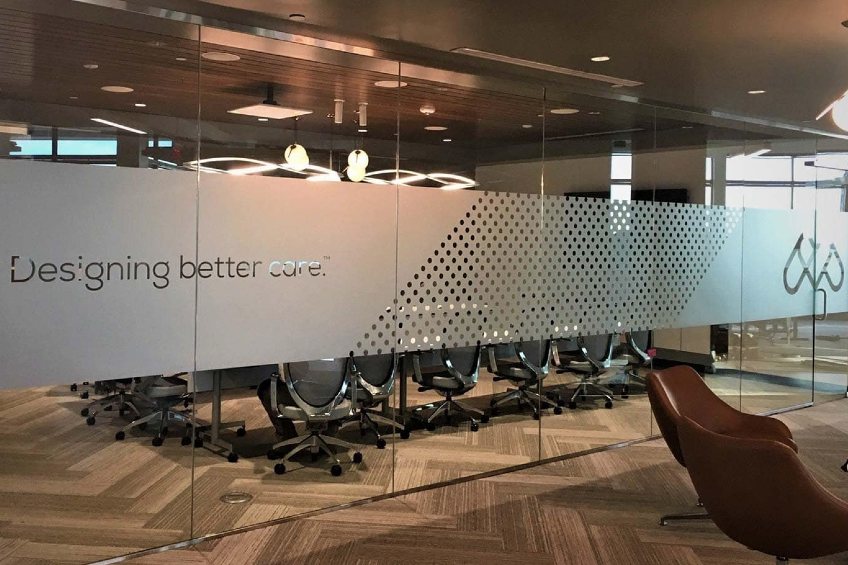 The etched glass look is very popular for windows, doors, partitions, and other glass surfaces. It’s not only beautiful, but it also provides functional benefits. Glass is etched primarily to 1) enhance privacy, and 2) add design, visual interest, or branding to glass surfaces. Two of the most popular techniques for etching glass are acid etching and sandblasting. Both of these techniques require a skilled glass fabricator or glass artisan, which adds to the expense. However, you don’t have to pay for expensive etched glass to achieve the same textured look because frosted film is a great alternative.

Why Frosted Film Is Better Than Etched Glass

The costs for glass etching can run anywhere from $125 and up per square foot. Frosted film, on the other hand, is a fraction of the cost, so it’s much easier on your budget while still achieving the same aesthetic.

You either have to buy etched glass off the shelf with limited patterns and designs to choose from or pay a glass craftsperson to create an expensive custom design. Frosted film, on the other hand, can be laser cut into endless designs for logos and branding. It also comes in many different patterns, textures, and opacities, giving you numerous options for customizing a unique design.

Glass artisans etch glass by scratching the surface, either using sand and forced air or chemicals. Etching is very hard to remove and usually can’t be completely erased from the glass without altering the look of the glass or damaging it. On the other hand, a professional can easily remove window film without any damage to glass surfaces whatsoever.

Want to change the etched pattern on your front door at home, or rebrand the glass walls of a meeting room in the office? No problem! It’s easy to swap out frosted window film as often or as many times as you like.

Glass fabricators usually etch glass in a fabrication shop prior to the building installation. Adding etched glass often requires replacing windows and other glass surfaces. However, frosted window film installs onto existing glass surfaces, so there’s no need to replace your existing windows, doors, or glass partitions. A professional installer can easily and quickly install window film on-site with little disruption to your home or work environment.

If you’re considering revamping your space with the addition of etched glass, you should take the advantages of frosted film into account as well. Frosted film provides the same aesthetic as etched glass at a fraction of the cost and with additional benefits.

ST Graphics, the space-enhancing specialists, would love to help you create a custom branding solution. ST Graphics is the largest 3M certified window film installer in the midwest. We serve schools, business owners, designers, and architects in Ohio, Indiana, and Kentucky. Schedule a free consultation, and we’ll bring your space to life.